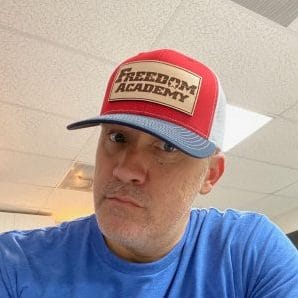 Hello my name is Jason Fleegle and I have just finished my 15th year as a Junior High American History teacher at Freedom Academy in sunny, dry-heat Phoenix, Arizona.

Before Freedom Academy I have worked as a High School varsity basketball coach (boys and girls), a Junior High and High School Athletic Director, a Title 1 Reading Specialist, a Kindergarten Aide, and a summer camp Counselor. I have been lucky to work with students in a number of different educational fields with a wide range of ages.

I believe students need to see teachers who are passionate about what they teach, show a love and concern for their students beyond the classroom, and can make the material they are teaching practical to the students life. When students see these ingredients come together from the teacher it makes for a strong and rewarding educational experience for the student.

A few quick things about myself outside of the classroom is my father is a teachers Aide in Ohio, my wife is a High School and College teacher here in Arizona, and I am an avid Ohio State Buckeyes fan, as well as, all teams related to the greatest city…Philadelphia!

My faith journey probably begins around the age of 10 years old when I accepted Christ as my Savior while a camper at church camp in Columbus, Ohio. (Big Bear Lake). At the time, I thought I knew what I was doing when I accepted Christ, but in hind sight, I had soo much to learn when it comes to being the best representative of the kingdom I can be.

Through most of my early education and into the beginning of high school, I really had not advanced much in my faith journey at all. I would attend church on occasion or on major holidays, but only if my parents or grandparents would be in attendance as well.

Around the beginning of my junior year of high school, I began attending church a little more regularly, however for all the wrong reasons. The neighborhood church that my family at times would attend announced that the youth group was forming a youth basketball team that would train and compete against other local youth groups in the area. The idea of mandatory youth group attendance was not exciting at the time, but the idea of playing basketball got me to begin attending.

The more I attended youth group, the more people I met and began to establish friendships with. At this time I was still pretty naive in my faith journey, but I was attending willingly! Eventually I would join the youth group on numerous outings and even go on some mission trips to some of the roughest locations in Ohio, Los Angeles, and even Russia. It was on these mission trips my “internal alarm clock” went off and I began to awaken to the idea of intentionally beginning a “real” faith journey.

At some point after our churches mission trip to Russia I was approached about the idea of attending bible college (Valley Forge Christian College), which I did not even know existed. I eventually went on a tour of the school, met with admin, and was asked to walk on and play for the college basketball team there.

While in college I studied and learned many things that I, again, never even knew existed or should be accounted for in a Christians faith journey. Each of my college classes were extremely helpful in guiding my walk, however none of them could replace the hands on opportunities I was given to minister. While at Valley Forge I had the opportunity to be an interim Youth Pastor at Norristown Assembly of God and also be apart of sports ministry through Athletes International and the Phoenix Dream City Church in Phoenix, Arizona.

Upon completing my summer of ministry in Phoenix, I felt a heavy urging to stay in Phoenix and not return to college that fall. Shortly after making the decision to stay, I was hired to coach high school basketball at Phoenix Christian where I would hire my first assistant coach and my eventual wife.

I continue to live in Phoenix today and I am daily reminded of the platform and ministry I have been given in working with kids on and off the basketball court. Since making the decision to stay in Phoenix, I have married, had two wonderful kids, and been able to work with countless student-athletes at a number of different institutions. My family and I attend a wonderful church, Christ Church of the Valley (CCV) where we attend faithfully and find times to continue to minister and volunteer.

Through all these memories , I am daily reminded… “the end is not the trophy”> The trophy is in putting the work to invest in others whom we will one day meet in a much better place!

I love playing and watching most college or professional sports. I am a huge fan of The Ohio State University and all teams related to the great city of Philadelphia. Outside of sports I love investing, fishing, biking, traveling and just overall being with my family!

Currently, there are no courses.