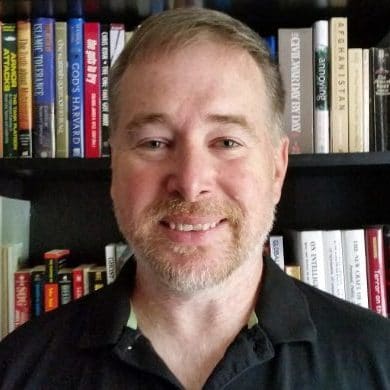 I’m Dave Mugg, and I have a passion for unleashing the motivated.

I want to make the high school courses that students take matter to their adult lives, and I love to help people learn! I am the CEO and Founder of Frontier Christian Academy, where we are seeking to make high school relevant through adult accomplishments.

I have spent a sizeable portion of my adult life learning various things: from bagpipes to bluegrass to bull riding. I retired from 21 years as an Army officer (Infantry and Special Operations) in 2015. After graduating West Point in 1994 with a double major in German and Arabic (and a Mechanical Engineering Track), I served for 8 years in the Infantry before transitioning to Psychological Operations (PSYOP).

During my time in PSYOP, I got a Masters in Defense Analysis (think “applied international relations”!) at the Naval Postgraduate School in Monterey, CA. Following that, I ran the Army Special Operations Language School at Fort Bragg, NC from 2007-08 where, by pioneering a relationship with the Performance Enhancement Center, which had been doing research on learning styles, I raised the graduation rate by 40% in one year in 10 core languages taught to three different branches of the Army.

I have worked in Jordan, El Salvador, Egypt, Iraq, Qatar, Afghanistan, Lithuania, Kenya, Djibouti, and Mauritania. I was part of the startup team designated to create Special Operations Command: Africa (SOCAFRICA) in 2008, where I served for 3 years. I was the lead planner for U.S. Army Europe in putting paratroopers in Poland and the Baltics in response to recent Russian Aggression (2014).

I later got my Masters of Education in Secondary Education.

While stationed in Germany, I met my German wife, and we have 4 small boys who keep us busy.
I have spent a couple of decades working with youth in various contexts and on different continents, and I am convinced that high schoolers are mentally capable of being “producers of adult value.”

The problem that motivates me to teach the courses that I do is that right now, our best students, in our best schools, on their best days, are merely “consumers of information.” I cannot let that “opportunity cost” slide! I am focused on preparing students to lead the world, no matter what it looks like, when they are 30. I am determined to make high school relevant through adult accomplishment (because, let’s face it, when most of us think about high school, “relevant” is not the word that springs to mind!)

I was actually saved in a Baptist Sunday School classroom when I was 3 (a long, long time ago, in a galaxy far, far away!) The Sunday School teacher asked who didn’t want to go to Hell, and that seemed like a pretty good idea to me, so I raised my hand and trusted Jesus to see to it.

Two years later, I remember coming to the kindergarten teacher in tears because I could not convince my classmates that there was a hell. In retrospect, two things surface from this experience. First, thus began a lifelong approach to apologetics that still obsesses me to this day. And second, I really feel for that kindergarten teacher in trying to determine how to solve that situation!

Years went by, and I had been trained well in the truth of Scripture in church and at home. My dad was an elder in the church, and my mom ran the Christian School that the church had started. When I entered high school, the Christians were underground and on the run. You see, my high school was ranked 4th Academically in the nation at the time (Westminster Schools Atlanta), and they had a debate team that had been national champions ever since anyone could remember, and many of them were in class with me and hostile to Christianity (along with many of the Ph.D. faculty.)

I took the stance of my namesake and responded in kind: “who is this Godless Philistine that dares to insult the armies of the Living God.” By my sophomore year, the Christians were no longer in hiding, but I had become the war itself. I had pushed everyone that cared about me away, and I had my “Elijah moment.” “Oh, Lord! They have torn down Your altars, killed Your prophets, and I alone am left…” You get the idea.

Like Elijah, the Lord showed me the remnant in the form of several friends of mine who were able to deal with my abrasiveness until it wasn’t so bad anymore.

I have had the opportunity to see the fruit of my labor in the faith. When I was in Clarksville, TN, I led the college and career group in the local Baptist church, and had the opportunity to see the Lord bring those people from Christians who did not even recognize the story of Jonah (even though they had been raised on the Sunday School “curriculum” all their lives) to the point that many of them are deacons, teachers, and even pastors. I was privileged enough to lead that effort, and I am still in contact with many of those people today.

Currently, my wife and I are heavily involved in Perkinsville Baptist Church in Boone, NC, where we moved in the summer of 2021.

I have done everything from bull riding to bagpipes to bluegrass, sword fighting to scuba diving, and many things in between.

I play any musical instrument you can show me how to play a scale on. I mostly focus on bluegrass/old time/Celtic fiddle, rhythm guitar, and I am trying to teach myself dobro without practicing, so it is somewhat slow going.

I have written a few books, including a couple of novels. I am fascinated with ancient European history (pre-Greco-Roman). I enjoy investment strategies and arguing international politics. My wife and I enjoy analyzing temperaments and trying to figure out how to help people with that knowledge.