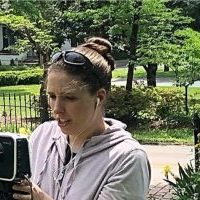 Adra has been teaching theatre classes for 15 years and Introduction to Film for 2 years. Her teaching credits include Bezalel School, Concord Performing Arts Academy, CEEC (Christian Education Enrichment Cooperative) , and the Oak Ridge JR Playhouse, where she was the Summer camp director for 2016, 2017, and 2018. She has written over 20 plays, that have been performed in the United States, as well as internationally, and she has directed numerous other plays- including, but not limited to: ‘A Christmas Carol’, ‘Robin Hood’, and ‘The Wind in the Willows’. Adra has experience onstage as well as off, working with The Passion Play in the Smokies for 7 years, and then going on to perform with The Word Players. Since 2012, Adra has been working in Faith-based independent Christian films and has worn many hats including; acting, casting director, camera operator, boom and sound, make-up and wardrobe, assistant director, prop/set design assistant, etc. Adra has worked in over a dozen feature films and short films to date. Working in films has been Adra’s main goal since she was 14 years old, and she plans on continuing to work in the industry. She is married to the love of her life, Jonathan, whom she met while working on a film set. They are expecting a little boy this July.

Adra is a Bible believing Jesus follower. She gave her heart to Jesus as a child, and has been involved with many ministries locally and internationally. She longs to serve God in the film industry, and work on films that are God-honoring and faith-building. She wants to be part of a movement to reclaim the arts for God, and to achieve excellence in filmmaking.

Currently, there are no courses.