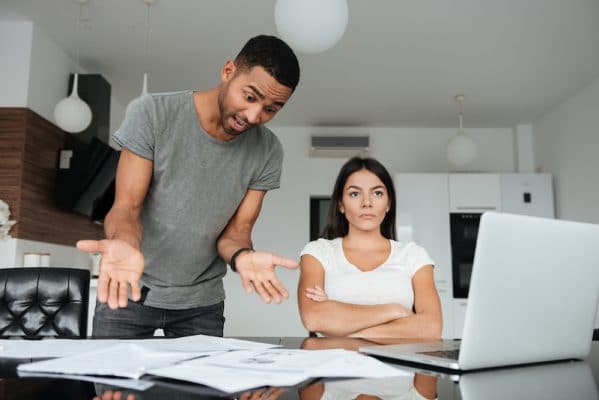 First, a look at some of the potential negatives of homeschool dads becoming intimately involved in the teaching process. One potential problem is the simple mathematics of two humans with two opinions about the same project.

It is no secret that people tend to become very convinced about the merits of their own opinion and tend to think less of the opinion of others. While this is not a problem at all unique to homeschooling families, it still applies to them: husbands and wives don’t always see eye to eye on everything.

Once two opinions take the place of one, difference of opinion will invariably follow. Be prepared to appropriately deal with this simple fact of life before homeschool dads join homeschool moms in carrying out the education process in their homes.

There is a second factor here which has the potential to make this issue even more poignant. For many homeschool parents, uncertainty is the real enemy. Parents feel the pressure of choosing a path so different from the norm. A lot of people look at homeschool parents suspiciously and wonder if they are really qualified to teach their children, and, often, the people who do this the most of the homeschool parents themselves.

Unfortunately, with that uncertainty can come a heightened sensitivity towards anything that might be criticism. When considering that husbands and wives are working on this homeschooling thing together, the potential difficulties of homeschool dads helping out homeschool moms are obvious.

Imagine a scenario which is certainly not far-fetched. The school day is over, and Dad is due home in a few minutes. Mom had a rough day of homeschooling today. She simply could not get kindergartner to sit still for anything, 4th-grader was unenthusiastic about English and science, and worst of all, 11th-grader got done with math after only 20 minutes of work.

Mom made the mistake of reading an article she found on Facebook about how to maximize your high schooler’s academic potential, and was suddenly confronted with how much “less” she was doing for 11th-grader than the three “perfect” homeschool families featured in the article were doing. Now the doubts are running rampant: is kindergartener going to be developmentally delayed because of her flaws as an educator? Will 4th-grader ever learn to love learning? Is 11th-grader just coasting through his education because she is not organized enough to have a more fully developed curriculum plan for him? Was it even a good idea to homeschool to begin with?

Mom is almost at the point of tears already when Dad bounds through the front door.

“Hey, honey! Listen to the amazing new homeschooling idea I have. It’s going to take a lot of adjustment and extra work from us, but I think it will be a huge improvement for our kids!” In hindsight, I’m sure Mom will realize how great it is that Dad is such a loving, caring, present, and involved homeschool dad, but at the time she can’t see clearly enough through her self-doubt (and tears) to realize that. So yes, there are some potential cons to very involved homeschool dads.

So what are the advantages of Dad being active in the homeschool process? First, the psychological benefits need to be considered. It is well established both by research and by common sense that children benefit from a father’s active presence in their lives. It may not be the most politically correct idea, but the facts are clear: kids need their dad – and they want him, too! God designed children to come from the combination of a man and a woman, and that kind of family unit is the soil in which children grow best. Their education is no exception.

Two Heads are Better Than One

There is also the old adage that two heads are better than one – that is most often true. Two pairs of eyes observing the children’s reaction to their work, two pairs of hands helping with assignments, two pairs of hearts sensing their children’s state of being, and two brains working on forming all of this information and instinct into a cohesive educational experience, are much more likely to succeed than one. It is often true that one parent simply “gets,” or gets along, better with one child than the other parent. You’re going to need an intimate understanding and awareness of your child to maximize the benefits of homeschooling. Believe me, the all-hands-on-deck approach is best.

Here’s another old adage – many hands make light work. Unfortunately, there are often not a lot of hands available when it comes to homeschooling. It can add up to a lot of work for Mom. But if Dad is ready and willing to share some of the burden, all the better! So let Dad grade the paper. Goodness knows you’ve earned the night off! Be grateful he’s willing to do it – not many men would be!

There is also the element of differing expertise to be considered here. It’s not at all uncommon for Dad to be much more expert in math, for example, when Mom has a knack for English. Trying to squeeze teachers into teaching subjects that they don’t love or excel in is one of the biggest weaknesses of mainstream schooling. Homeschool families, however, are free to take advantage of the fact that Mom’s skills are not always the same as homeschool dad’s!

So there will be some kinks that need to be worked out when it comes to both spouses taking part in the homeschool journey. A lot of understanding, cooperation, and communication will certainly be in order. There is no doubt, however, that having both parents intimately involved offers far greater benefits than it does complications. The majority of an entire generation of homeschool families who have taken this approach is a testimony to this fact!

What pros or cons would you add to this list for having homeschool Dad involved in the homeschool education? 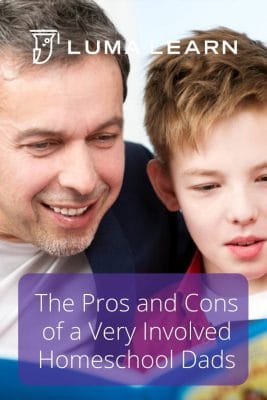